He was elected Senator of the Gironde on January 5th 1888, then re-elected in 1897, until his death. As a member of the Republican Left and soon President of the group of the Moderate Left (the most moderate in the High Assembly), at first he adopted some very conservative positions in cases on social laws (modification of article 1780 concerning service contracts, arbitration between employers and employees, the work of women and juveniles) and, in his report, rejected the bill of modification of the law on professional trade unions. He distinguished himself, especially in 1893 and 1894, as the reporter on the voting of three of the four laws aimed at the repression of anarchist attacks (the famous "lois scélérates"). However, he fought energetically against an amendment that aimed to transfer infringements concerning the detention of explosives to the War Council, which had become more repressive, since it had refused to allow the romoval of common law jurisdiction from these courts. In the same way,on May 28th 1897, he pushed for the voting of the law that put an end to secret investigation in the absence of a lawyer, and fought for the institution of a system of contradictory expertise in criminal matters. In 1889, he was chosen by his peers of the Senate to become a member of the Commission of the Nine, in charge of the instruction of the lawsuit against General Boulanger.

On January 26th 1885, he became Minister of Justice. He adopted a law that allowed more extensive opportunities of appeal in criminal cases, better compensation for injury suffered by victims of miscarriages of justice, and came up against a "legal event" that had just rocked France : one cold day, twenty-one days earlier, Captain Alfred Dreyfus had been convicted of treason, demoted and, since January 18, had been waiting on Ile de Re to be transported to Devil’s Island.

However, since his lawsuit in 1894, Dreyfus had not stopped protesting his innocence. His conviction had been pronounced " in camera ", with the help of false secret documents which had not been communicated to the defence. Few people were convinced of Dreyfus' innocence. The case was closed and the "Dreyfus  affair" (See A Chronology) had not yet begun.

While Minister of Justice, Trarieux obtained the communication of copies of Dreyfus' writing and discovered discrepancies between the convict’s writing and that of the author of the document that had established his guilt. Besides, one of Dreyfus’ lawyers, Mr. Demange, had come to reveal to him that a secret document had been communicated to the War Council unbeknown to the defence. " An abomination !  " he was heard to say.

This is how after his departure from the Chancery, (November 10th 1895), Trarieux sacrificed his profession and his political career to becoming the untiring defender of the innocence of Captain Dreyfus. On December 7th 1897, Ludovic Trarieux was the only Senator to support Scheurer-Kestner, and praise his civic courage.

Just before Esterhazy’s lawsuit on January 8th 1898, he published an open letter in " Le Temps ", addressed to the War Minister, Billot, to denounce "the parody of justice ".

" Is it true that in the course of the year 1896 the Lieutenant Colonel Picquart, chief of the Secret Service, was called on to examine a case of espionage against a senior officer ?

" Is it true, that struck by the resemblance of the writing with the note supposedly written by Dreyfus in 1894, he realised that a miscarriage of justice may have been committed ?

Esterhazy was acquitted and six days later, on January 13th 1898, Émile Zola published his "J’ accuse, an open letter to the President of the Republic ", in " L’Aurore ", Clemenceau’s paper, at the cost of a libel action against him, in the Assize Court .

In the Zola trial, Trarieux was an essential witness for the defence, as he was later in the lawsuit in Rennes. Recounting evidence that he had collected, revealing what he had discovered concerning essential documents and explaining how he had become convinced that Esterhazy was guilty, he was at the forefront of those pierced at the very heart by Dreyfus' innocence by guaranteeing the support of a former Minister of Justice, who gave evidence in court.

That evening, the dimension and nature of his mission changed. Because he had "heard the resounding clamors of " down with the Jews" " and after General Boisdeffre and General Pellieux had dealt the final blow" that later proved to be the "Henry forgery", in between two hearings of the Zola case, on 17th or 18th February, at the tenth or eleventh hearing, Trarieux thought about creating the French League for the Defence of Human Rights and the Citizen.

On February 20th 1898, a first meeting took place in his home, at 4 Logelbach Street. After several months of tireless activity, having united the support of a thousand people, Ludovic Trarieux and his friends convened a general assembly, in the hall of the " Sociétés Savantes ", in Paris.

It was there that, on June 4th 1898, was finally formed the French League for the Defence of Human Rights and the Citizen, of which Trarieux was proclaimed President and entrusted with the drawing up of its statutes. On July 4th 1898, the first manifesto of the League of Human Rights proclaimed: " from this day, anyone whose liberty is threatened or whose rights are violated can be ensured of obtaining help and assistance from us.

On August 20th 1898, after the humiliating arrest of Colonel Picquart, found "guilty – of having denounced the "Henry forgery",on the orders of Cavaignac, the War Minister, Trarieux wrote another open letter to Cavaignac, and distributed 400 000 copies of it all over France, calmly proclaiming: " There is no real judgement without defence when one is unaware of what one is accused of... Without a hearing, no one has the right to juge ".

Cavaignac had to resign on September 5th 1898 and nearly one year day for day after the constitution of the League of Human Rights, on June 3rd 1899, the Supreme Court quashed the Dreyfus judgment of 1894 and referred the case to the War Council in Rennes.

As a witness in the lawsuit in Rennes, from August 7th to September 9th 1899, Ludovic Trarieux justified this commentary by Victor Basch, the third President of the League of Human Rights (1927) :

"  I have heard some great speakers, but I had never heard a speech like that. All the passionate indignation that a spiritual soul can contain, all the fraternal affection of a truly human soul, all the logic that any right-thinking mind can contain, were revealed by Ludovic Trarieux in his speech. Jaurès, who was listening to him next to me, said: "It is the highest oratorical demonstration I have ever heard".

Though reducing the sentence, the War Council in Rennes did not fail to convict Dreyfus a second time. "Our defeat is of the kind that do not discourage, but foster courage and give grandeur to certain situations" commented Ludovic Trarieux who, in the name of justice, challenged the Senate, for Dreyfus' pardon on grounds of ill health pronounced by President Loubet, in September 1899, as well as for the proposed general amnesty, in June 1900, by the Waldeck-Rousseau government, in order to calm the situation down.

In the same way, he continued to develop the League of Human Rights, that soon had several tens of thousands of members.
Exhausted by his efforts and his ill health, in 1903,he was forced to hand over the presidency of the League of Human Rights to his friend, Francis de Pressensé. Until his death, he dedicated his last efforts to Dreyfus' rehabilitation, (which he did not live to see, since it took place on July 12th 1906) and to the defence of human rights.

He died on March 13th 1904 in his Parisian apartment at 4 Rue de Logelbach.

" An admirable consciousness has disappeared "

, noted Dreyfus the same day in his " Carnets ".

As for Francis de Pressenssé, he had to say: " Trarieux leaves two immortal daughters, firstly the example of a life dedicated to law and liberty, ennobled on his decline by the sacrifice of struggle; it is this League of Human Rights that will continue the work of which he and we will have simply laid the foundations " .

And to learn more :
See : "The Dreyfus Affair "- A chronology. 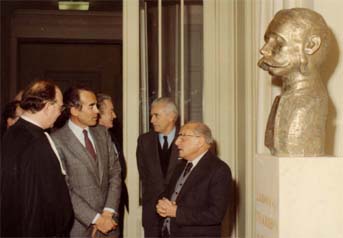 You may reproduce materials available at this site for your own personal use and for non-commercial distribution. All copies must include the above copyright notice.